This is by far the biggest post I’ve posted. Okay, onto the ‘gami, From left to right:

Now, how much of your time did the waste? Seriously, this is basically a bunch of bad puns, with some good origami(?). Kidding!

Made this for my cousin for Christmas (notice the hat). The overalls are made from real felt, and the goggle is foil. Yeah, I got nothin’ else. XD

Next time: Santa Yoda! (And others)

And we have had a great one, haven’t we? I want to end with a bang, so on New Year’s Eve, I will post a special instructions of any of the Doodle-Gami’s of your choice. So get typing!

Here is the thirteenth Doodle-Gami of my first year on here, which is already coming to a close. Here are the big-headed Titans themselves.

Just so you know, I have made the Titans without giant heads, but these are better for some reason, in my opinion. You have Raven, Cyborg, Starfire, Robin and Beast Boy posing for the pic. So there. 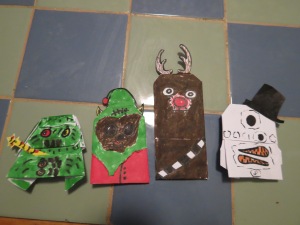 In time for the holidays, I give you this post, which has, from left to right: Decorator Vader, Weird Elf-Ewok Hybrid thingy, Chewie the Red-Nosed Wookiee, and Snow2-D2

Second of all, I would like to give a shout-out to Whatever-Warrior, whom is a regular nowadays and whom I know in real life. Thank you for viewing, Meagan! Hope you stay for many more cycles!

And I am giving a shout-out to newly dubbed admin Zach, and seeing his site, I know he’ll not mess this site up. (Now, I might, but…)